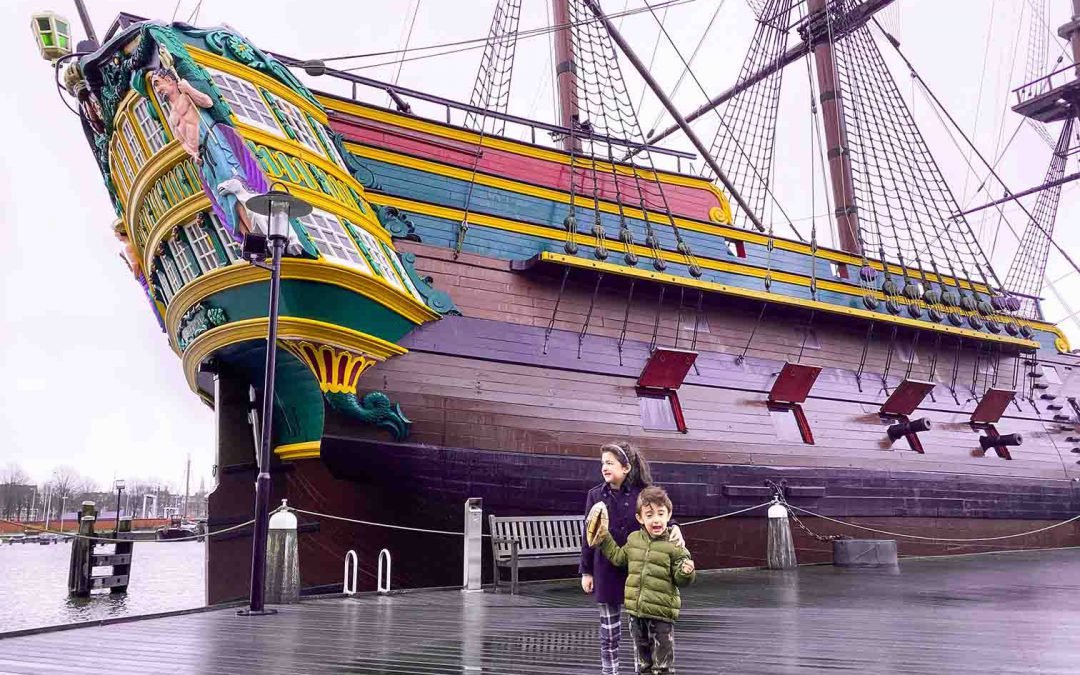 Do you love to explore new things? Tomi and Mimi sure do! And they love a good adventure too. This story is about their adventure on an old Dutch trading ship. Very old, this ship is 500 years old. Look at the masts! Look at the cannons! A great adventure indeed, come along and find out what it is all about.

Tomi and Mimi discovered a lot of new things and had many adventures on their travels to Amsterdam. Do you know where that is? Amsterdam is the capital of The Netherlands. You may have heard of it before, some very famous foods and people come from The Netherlands. Rembrandt van Rijn and Vincent van Gogh are famous Dutch painters, Gouda is a Dutch cheese named after the town it was first made and Stroopwafels, thin waffles with caramel inside, are a typical Dutch treat, yum yum.

Tomi and Mimi were most impressed by this huge sailing ship. It is an old Dutch trading ship from the 17th century, that means it was used more than 500 years ago*, that is a long time ago, don’t you think? Ships like this one would sail all the way to South East Asia, like Indonesia.

But 3 mastered ship like this would not travel alone, that would be way too dangerous. They liked adventure on an old Dutch trading ship, but not this much: There were pirates waiting to steal all the gold coins they brought to buy very expensive spices. Spices? Like the ones you eat in your dinner? That’s right. The Dutch would sail all the way to the East to buy spices like pepper and cinnamon. But also coffee and tea. These spices were so expensive, people would display it in silver bowls.

Because of the dangers, every trading ship had cannons to defend themselves. They would also sail together in groups. Many of these old sailing ships, but from different owners, would go to the East together. These traders had formed a trading club called the VOC. This stands for Dutch East India Company. You can imagine how rich these traders must have been. They had so much money, they built beautiful houses alongside the canals of Amsterdam. They had money to spare to decorate it beautifully and buy art. Especially portraits of themselves were popular. This way they could show off how important they were. This time in The Netherlands is called “the Golden Age”*. That means the country was prosperous (rich) and spend money on making it bigger and better and most of all more beautiful.

On their adventure on the old Dutch trading ship, Mimi tried to fire a cannon and Tomi was the captain. They ate at the captain’s table and preferred the captain’s bed over the hammocks of the sailors any time. It was a great adventure, indeed!

Tomi and Mimi are having more adventures on their travels to The Netherlands. They pretended to live in a Canal House in the Canal House Museum and had high tea like a prince and princess in the beautiful canal house of the Bag Museum that looks like a palace.LINK TO ARTICLE IS COMING. Are you curious what they saw when they went searching for Rembrandt and Van Gogh? Read about their adventures here LINK TO ARTICLE IS COMING

If you are traveling to The Netherlands and want to have an adventure on this old Dutch trading ship from the VOC yourself, ask your parent to visit The National Maritime Museum . Maybe you are not traveling, but are doing a unit study on The Netherlands, then visit the website with a caregiver Het Scheepvaartmuseum. This museum has a lot of wonderful things on display besides the VOC ship too, so when you go, make sure you take a look at the children’s section of the museum (your parents will like it too!)

Tomi and Mimi hope you enjoyed their old Dutch trading ship adventure in Amsterdam today. Maybe you have a ship museum or trading museum nearby too!

For the papas and the mamas

Dear caretakers, grandparents, papas and mamas, the National Maritime Museum is great to visit and sparkles the imagination of both child and adult. Because of this, it is a popular field trip destination and it can be busy during weekdays.

“Het Scheepvaartmuseum” is closed now due to COVID, but is usually open Tuesday through Sunday from 10am to 5pm. Take a look at the Christmas holiday opening hours, before you plan a trip and be mindful that the Dutch celebrate Kings Day in April, which means shops and museums are closed. Have a look here for more info on opening hours and tickets.

There is a restaurant and a museum shop to take a break and bring back a souvenir. There is even a library for maritime enthusiasts (maybe not so much for kids). There are wheelchairs available to borrow for the museum, but the VOC ship is not accessible this way. Watch out grandparents, the stairs of the ship are steep and the deck is terribly slippery when it rains.

*This VOC ship is an exact copy of an original. *The term “Golden Age” is now being revised, because the Dutch didn’t just trade spices and coffee, but unfortunately also slaves.